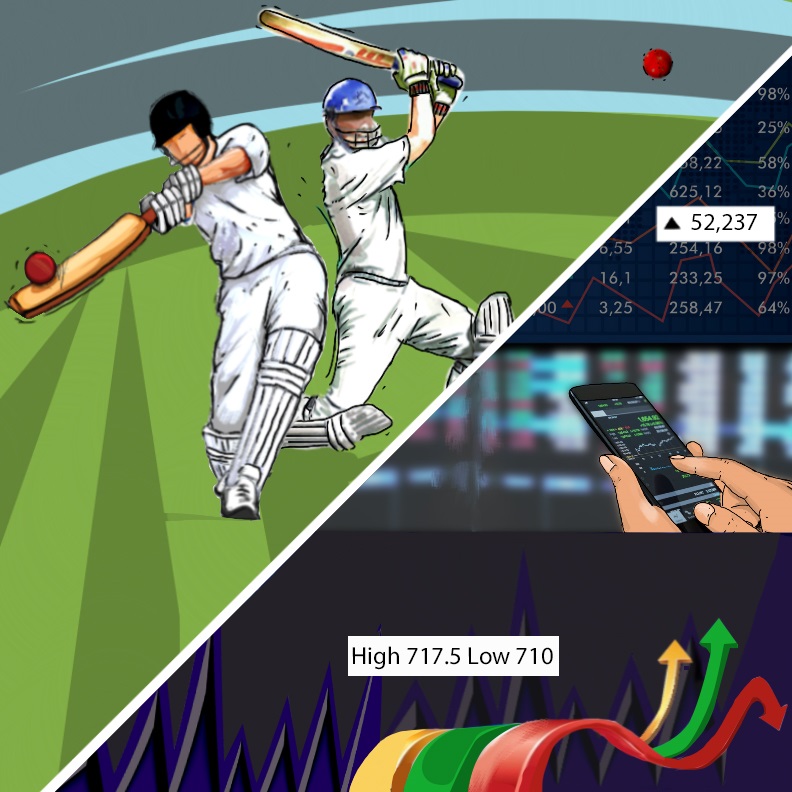 On it, I am watching the chart of a particular stock being traded on Nasdaq. It is at a multi session high and showing momentum like a blaze of runs being scored in the Powerplay of a T20 match.

The stock is Fiverr International.

My pulse races just like a batsman at the cricket crease, upon sighting a low juicy full toss bowled at him by the opposition.

Without further thought I position myself quickly by getting underneath it and hoisting it straight over the bowler’s head and out of the stadium for a six!

All the stock that I hold is sold giving me a neat 19 % return in about 9 trading days.

In today’s era when within 5 minutes of posting on social media, you receive zero likes (and that seems like an eternity) then the thought of holding onto a stock for 5 years seems incomprehensible to many people.

Similar is the case in Trading. If X % is the yield on a 1-year FD currently and can be considered as a base of 100, then in what multiple of X can be your returns? Can that strike rate be like a top T20 player?

Today there is technology, greater greed, and a plethora of information all around us to make this possible. The world is shrinking, and our access is deepening. From Wall St. to Nikkei and from the Euronext to Sensex – all of them literally are now in the palm of our hands.

It is no longer limited to investing in your local stock exchange only.

Just like in T20 cricket an IPL team has players of different nationalities, stock portfolios today have an international flavour to them. Netflix and Coal India can co-exist and so can LatAm retail giant Mercado Libre with Europe’s Volkswagen.

This is not just exclusive to HNWI’s but holds true for a retail investor too. The range of shot selection is widening.

But just like in T20 not every ball can be hit for a boundary, similar is the case in trading. Not every stock can be bought and sold over a shorter duration. Timing and shot selection become paramount. One must not only pick and choose which ball to hit and when, but also after doing that when to exit!

You simply cannot linger around the crease wasting time.

So of course, such a strategy is fraught with risks. You may perish while trying to play an extravagant shot or you may simply run out of patience and mistime a pull shot.

I know all of this goes radically against some well-established dictums on investing, including one from the great man Warren Buffet himself who had the following to say on traders –

But the fact is that these romantics are lining up on the streets outside the stock exchanges. Be it on Wall Street or Dalal Street. And they are ready to tango with anyone who promises to do a waltz with them on the trading floor.

On the opposite end are of course the Test match players. Investors who are willing to grind for 5 days (read that as 5 years) by holding onto their position patiently, adding to those positions on any opportunity, ignoring the noise around them from the close in fielders who may try and distract them to induce a false shot. They stand firm and will not sell as long as their focus is clear.

As the cricket coaching manual says,’ The longer you stay at the crease, the more the number of runs will accrue to you automatically.”

Buffet’s Boys not only show patience but also immaculate discipline in their approach. Which delivery to play and which one to leave (however tempting it may be) is built into their DNA. Time and not timing is of utmost importance. Take time to settle down, build your portfolio like you would your innings and target the return you want to achieve.

After all, in Test Cricket (unlike in T20’s) the Strike Rate is secondary. Your batting average is more important – in other words how much returns you achieved per annum per stock compounded over your holding period.

However, one thing is similar in both – Stocks are chosen with extreme due diligence, in-depth analysis of a host of financial parameters, trends in that sector/market, dividend history and company management.

One can do all this individually or take the help of professionals in the financial sector.

It is akin to going into a match doing the opposition team’s detailed analysis through watching innumerable videos, noting their strong and weak points, how they play spin/pace etc. Not only this, external factors like pitch conditions, weather forecast on match days and audience support are also taken into account.

From then on, the approach changes. The Robinhood guys come all out with guns blazing and look to maximise returns in shortest possible time. At the end of their target holding period (it could be a month, a week or even a day!) they must pocket some returns by booking the trade.

On the other hand, Bufett’s Boys are more sober and avoid taking any risks especially early on in their innings. The focus is more on their defence and how they can build a portfolio by mitigating the risks as much as possible. Attacking style would come later on.

They keep accumulating and growing their wealth through the market highs and lows, through dividends/ stock splits and the occasional M&A if any.

Also, If you are a bowler, then the challenge gets even tougher! Bowl down the leg side in Test cricket and you may get away with no runs scored off you. Try doing that in T20 and either you will be penalized by the batsman who will flick it away for runs or the umpire who will promptly call it a wide.

Hence in trading you must be far more accurate. A moment’s hesitation while buying or selling and you could be penalized by the market. TESLA for about 8 trading days (12th May -21st May, 2021) was below $ 600. If anyone thought it may go down further and did not buy then an opportunity was lost to make 11% returns up to the point when it declared results on Monday 26th July, 2021. (It has gone up a further 6% until July 30th.)

A similar opportunity presented itself back home in India in a related space (EV) with Greaves Cotton. A trader picking it up in the 2nd half of May in the Rs. 130-135 range for a short term would have made a cool 25% as it rose to Rs.170 levels a month later in 2nd half of June 2021.

However, in trading selling at the right time is as important as buying.  So, in the above example if one did not exit Greaves Cotton at that time, then today one would still be holding the position languishing well below those levels.

Such is the nature of trading. One opportunity capitalised or not capitalised upon, may impact the entire portfolio. Just like in T20 one moment in the game – a wicket, a run out or a boundary, may change the entire match as it is of very short duration.

So, all it takes is one delivery to change the course.

This is what makes trading so exciting, just like a T20 game. You never know what surprise awaits you in the next ball, on the next market day.

Your adrenaline is pumped up when you see your call go right and alternatively you are filled with regret and remorse when the opposite happens. You log into your account frequently to check if any of your positions is ‘ripe’ enough to be plucked!

On the other hand, a long-term Investor who had a look at his portfolio in March 2020 and went to sleep unperturbed by the crash, to wake up a year later to find that nothing much had changed in their portfolio and maybe he/she had even returned a small profit.

However, a trader in between that period would have ‘Zoom’ed in and out several times and even ‘Netflix’ed a few shots to the ropes to augment his income while sitting at home during the pandemic!

Just like rotating a strike in T20 is of paramount importance so is that case in trading. You have to keep scouting for opportunities and enter/exit whenever the target is met.

This may rattle our thinking but the fact is the mind set is definitely changing. To highlight this, there are a couple of stats on both sides. One of them is that the total runs scored in one innings of some T20 matches today is almost on par with an ODI score (a 50 over innings), which was simply unthinkable a few years ago.

Secondly the time taken to finish Test matches is gradually shortening. Not only that, the result is shifting from more drawn tests to decisive results. For ex. from 1877- 1999 there were results in 60% of the Test matches played.

However, from 2000-2017 there was almost a 25% jump and 76% of the Tests played in this period had a result in them. Additionally the average duration of a Test during this above period is only 321 overs — that is under 4 days of play.

(A typical day in a Test has 90 overs bowled)

A similar change has undergone in the investors of today. More is needed and in quick time. Why wait until tomorrow when you can pocket some gains today? As the popular David Guetta song goes,” Live life given now, Tomorrow can wait..”

Finally, I would like to conclude by saying this trading mind set is changing the game dynamics. Today a Rishabh Pant can have the ‘audacity’ to play a reverse sweep in Test match cricket against a world’s top 3 ranked fast bowler like James Anderson. ( 4th Test, India Vs England; May 2021)

10 thoughts on “Trading Vs. Test Cricket”